Anyone who has taken Driver’s Ed in the US in the last 30 years has probably heard the adage, “10 and 2” at least once.  Looking at the steering wheel and picturing a clock, you’re supposed to place your hands on the wheel in the approximate location where 10 o’clock and 2 o’clock would be, for optimum control of the car, but in recent years this advised practice has changed.

While some new cars tout being able to park themselves, with technology developing the prospective point that a car could effectively drive itself; the operation or control of a car isn’t suddenly fundamentally different than they were when instructors taught ’10 and 2’ to new drivers.  Instead it’s the advances in safety that have spurred what is a fairly minor change in steering habits.  With more modern cars on the road containing air bags deployed from the steering column, the iconic 10 and 2 position isn’t optimally safe for drivers if they find themselves in a situation where the airbag might deploy.

Because the hands rest higher on the wheel at the 10 and 2 position, the forceful expansion of the airbag during deployment intersects your hands, which are invariably grasping the wheel firmly; resulting in trauma to the hands that can produce broken bones and in some recorded cases, loss of appendages.  The airbag can even force your hands toward you face, causing an impact that can result in a concussion or other injuries.  Some of the other potential dangers are more minor, but can still be serious.

The new standard advisement for most effective control of your vehicle, while keeping your hands safe from airbag deployment is the 9 and 3 position, centering your hands on either side of the wheel.  This places your hands on the outside parameter of the deployment of the airbag, should it go off; and some experts believe may provide drivers with better control of their vehicle.  Even at this position however, it’s advised that you pay close attention to your hand placement, particularly your thumbs.  In some automobiles with a broad center housing for their airbags, some drivers tend to rest their thumbs along that house, but if the airbag is deployed the potential injury to your thumbs will be great.  So it’s best to make sure to keep your thumbs along the outer edge of your steering wheel, creating a firmer grasp of the wheel and providing more reliable control of your vehicle.

And for drivers learning how to be confident driver, still honing their ability to drive a car safely, you can reduce the chance of deploying the airbag of your car by using SimuRide, the driving simulator from Aplusb Software!  SimuRide is a 3D PC driving simulation, available in a 3-monitor Professional Edition for commercial driving schools, as well as a single monitorHome Edition for Windows based home computers. 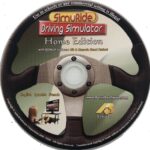