When you drive any version of our driving simulators, both Pro and Home Editions of SimuRide, the driving simulation will grade you on your performance for obeying the different traffic laws.  This includes making a full stop at the appropriate spot at stop signs.  If you fail to stop at the right place, a warning will show on the screen informing you that you missed a stop sign.

It’s important to know how to move through traffic affectively, safely and of course, legally.  Most drivers know the basic signs and markings that guide traffic.  Ideally it would be everyone, but anytime you expect someone to follow the same set of rules you and everyone else seem to know and abide, that’s when they do the unexpected by ignoring those rules; and that’s when things can get dangerous.

In the United States for instance, unless a car is turning left with room enough to get by, or your direction of traffic has two designated lanes (generally a white dashed line defining the median of those two lanes) under no circumstance do you pass another vehicle from the right.  It’s completely unexpected, which makes it that much more dangerous; for all the driver making such a maneuver knows, the driver ahead of them is about to turn right and could collide right into you.  Or the sudden appearance of a vehicle coming up and around from the wrong side of the road could distract the driver enough for them to lose control of the car and cause an accident.  This is, inexplicably, a common occurrence for people on motorcycles or mopeds – which are fully licensed vehicles, obeying the same traffic laws; and a legally entitled to a full lane of traffic, just as everyone else.

Some markings may depend on your municipality or general area that you live, but let’s review some of the basics:

A solid yellow line down the center of the road means you’re in a no passing zone.  Often you’ll find a set of yellow lines in the median; one may be a solid line and the other dashed.  If the line on your side of traffic is solid and the other side’s is dashed, your lane is prohibited from passing; while oncoming traffic is allowed to pass. If the line on your side of the center of the road is dashed and the other side is solid, your lane of traffic is allowed to pass and oncoming traffic cannot pass.  Two solid lines is an entirely no passing zone; while passing for both sides of the road is usually just a single dashed line.

As mentioned above, a dashed yellow line should not be confused with white dashed lines, which denote two lanes of traffic going the same way.  White solid lines along the side of a roadway may outline a bike path, where bicyclists are allowed full access to that lane, and drivers should be attentive of their presence.

When stopping at a stop sign, make sure not to break the threshold of the thick white line in your lane, extending from the curb in front of you.  This is a stop line, and is placed at intersections of high traffic, often for strategic purposes.  Stop lines will be placed further back from the stop sign or intersections for areas where semi’s often travel and require a wider berth to make their turns.  Stopping in front of that line will put you inside that turn radius and at risk for being hit by a turning semi.

Yellow lines along a curb restrict vehicles from being parked there; while different colored lines, like red or blue, may be used by different locations to denote emergency lanes or specially reserved areas, such as handicapped parking. 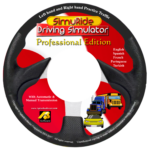